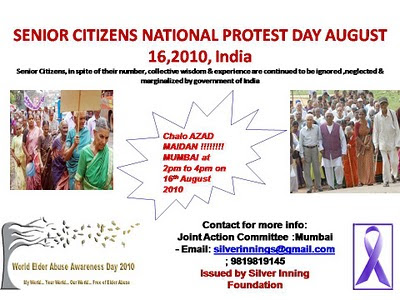 It’s sad to note that NPOP was formulated in 1999, but till date it has not been implemented by Central Govt. / Pan India, due to various reasons including lack of political will. Various NGO's and activist have been advocating its implementation and review. In this regards a ‘National Protest Day ‘is observed by all NGO’s, Senior Citizen associations/federation and Senior Citizens to press their demands on 16th August 2010.

During these 11 years the world has changed, there has been significant demography change in India's population due globalization and improved medical facility and lifestyle. The fall of joint family system and rise in nuclear family system has brought new dimension to the care and welfare of Elderly. Population of people above 60 years of age is estimated to be 96 million in 2010.The Life span has increased by 60% in 60 yrs.

After 63 years of Independence and democracy experiment there are segments of people who are not treated at par with others, there is injustice and discrimination towards them. One of the most neglected and ignored segment is of Senior Citizens. Elders are not considered as part of mainstream, there is unjust treatment to those who gain 60 years of age, and they are suddenly considered ‘Retired’, good for nothing. Government and Civil Society are not bothered of this experienced and skill group of people. 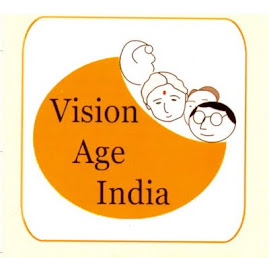